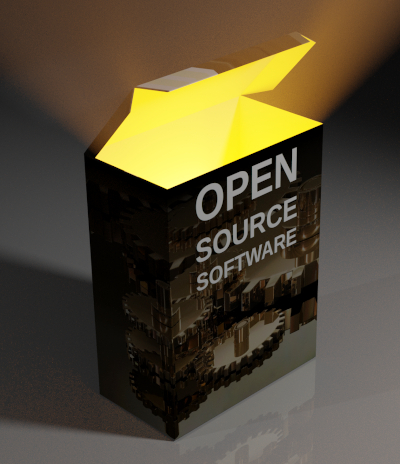 Imagine you’ve bought a car. You had to pay for it, so you might think that it’s yours and you can do whatever you want with it. But you can’t. While you can drive the car, you’re not allowed to make any changes to it. You can’t even open the hood to see the engine. And you certainly can’t share the car with anyone else; you can’t lend it to anyone.

Now imagine you get a car, but you don’t have to pay for it. You can modify the car in any way you want, completely dismantling and reassembling it if you wish. And you can share it with anyone you want. You can even make copies of your car and give it to your friends.

Simply put, open source software is software for which the source code is freely available to the public. While you can usually download the program code from the vendor’s website or from a code repository like SourceForge, modify it, and compile it as you like, you don’t have to. Most open source applications come nicely packaged, ready to use.

You can download and use open source applications without opening your wallet. While you’re encouraged to contribute something back into the project — whether a financial contribution or volunteer services — it’s not required.

Where you may face some cost is in support. Commercial applications often justify their cost by including technical support in their price. Likewise, many open source providers — particularly those handling larger projects — also offer paid support. But it’s optional and there’s a high probability you may not need it; the internet is full of online resources that will help you through just about any obstacle you encounter with blog posts, discussion forums, and tutorial videos.

The code for an open source application is freely available to everyone, potential developers who wish to improve it and malicious hackers looking for vulnerabilities. Of course, hackers look for vulnerabilities in commercial software too, and often find them. But while a closed source application may have a handful of paid developers examining the code for bugs and security holes, a comparable open source project is under scrutiny from dozens, even hundreds, of volunteer developers.

A commercial software vendor may hide any vulnerabilities they discover until they have the resources to fix them, or until they’re forced to acknowledge them by a public watchdog. Open source developers are more inclined to reveal potential holes quickly, knowing a swarm of programmers will immediately tackle the problem. There’s even a certain prestige among programmers that comes with being the first to find and fix a vulnerability, so that the more significant the hole, the more likely it is to be plugged quickly.

Android, the operating system that powers close to 70 percent of the world’s cell phones, is based on an open source project.

The three most popular web browsers (Chrome, Safari, and Firefox) are either open source or based on open source foundations.

Looking for open source alternatives to commercial packages you can use in your business? We’ll cover some popular applications in an upcoming post.