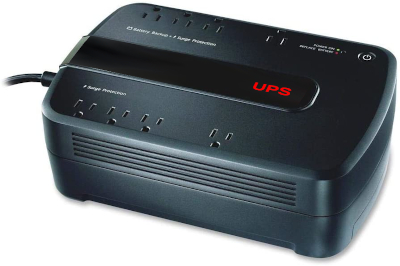 You’ve been working on this important document for an hour. You’re just about to hit Save … when the power goes out. Your screen goes dark. Your computer shuts down. A few minutes later the power comes back on.

A UPS may have helped you avoid this problem.

What Is A UPS?

A UPS — Uninterruptible Power Supply — is a battery backup system for your computer and related devices. It’s not meant to keep your system running indefinitely. Rather, it will provide power long enough to let you safely and cleanly shut down your computer and peripherals so you don’t lose data. It will also help to prevent damage to your hardware that can occur during a hard shutdown when the power suddenly fails.

The most obvious factor to consider when choosing a UPS is making sure it will provide power for as long as you need it. To do this, determine how much load you’ll be placing on the unit. This is the combined power, typically measured in watts, of all the devices you plan on connecting. Then look for a UPS capable of supplying that load.

The higher the capacity of the UPS, the longer its runtime — the time it will be able to supply power. Many UPS manufacturers provide charts or tools on their website to make this calculation easier. The longer the runtime the UPS provides, the more it will cost.

Some systems provide two sets of outlets; one with surge protection and battery backup, one with surge protection only. Choose a model that offers a sufficient number of the type of outlets you require. This article originally appeared on businesstechnotes.com. If you’re reading it anywhere else, it’s stolen. Please let us know at contactus@businesstechnotes.com

The battery in a UPS is designed to be recharged many times, but over time that ability degrades. Eventually the battery will reach a point where it can no longer hold sufficient power, or deliver it at a sufficient current, to do the job. The circuitry inside the UPS should, at that point, detect the failure and alert you that the battery should be replaced, usually with a visual and audible alarm. Look for a model that will alert you when the battery needs replacing.

Clean power from the grid is delivered in a smooth sine wave. But some models of UPS are incapable of delivering power in this way. Instead, they produce a simulated sine wave that may actually damage some types of delicate equipment. Check with the manufacturer of your equipment to determine its requirements, whether it will function with a simulated sine wave power or not, and choose a UPS capable of delivering power in the correct mode.

Some UPS systems can communicate with your computer through a USB cable. When the power goes out, the UPS can signal the computer to shut down cleanly, useful if you’re not present to shut it down yourself.

Uninterruptible power supplies aren’t really uninterruptible. That’s a misnomer. They’re not meant to keep your power on indefinitely. A power outage WILL interrupt your work. A UPS will just lessen the severity of that interruption and hopefully spare you from a headache later on.