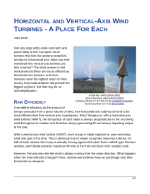 Horizontal and Vertical-Axis Wind Turbines – A Place For Each

Visit any large utility-scale wind farm and you’re likely to see row upon row of turbines that look like airplane propellers, turning on a horizontal axis. Have you ever wondered why vertical-axis turbines are less common? 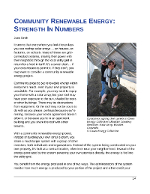 It seems that everywhere you look these days you see rooftop solar arrays … on houses, on factories, on schools. Many of these are grid-connected systems, sharing their power with their neighbors through the local utility grid in return for a feed-in-tariff. It’s a sweet deal … if your circumstances permit it. If they don’t, you may want to consider a community renewable energy project. 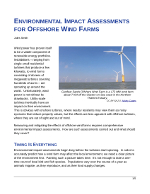 Wind power has proven itself to be a viable renewable energy option. Unfortunately, it is not without drawbacks. Utility-scale turbines inevitably have an impact on their environment. This is obvious with onshore turbines, but the effects are less apparent with offshore turbines, where they are out of sight and out of mind. 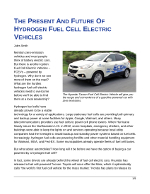 The Present And Future Of Hydrogen Fuel Cell Electric Vehicles

Mention zero-emission vehicles and most people think of battery electric cars. But there is another option: Fuel Cell Electric Vehicles – FCEVs – powered by hydrogen. Why don’t we see more of them on the road? What are the hurdles hydrogen fuel cell electric vehicles need to overcome before we’ll be able to find them at a local dealership? 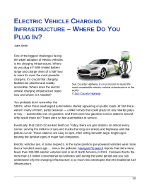 Electric Vehicle Charging Infrastructure: Where Do You Plug In

One of the biggest challenges facing the wider adoption of electric vehicles is the charging infrastructure. Where do you plug in? With limited battery range and charge times of a half hour or more for even the most powerful chargers, it’s crucial that charging facilities be plentiful and readily accessible. Where does the electric vehicle charging infrastructure stand now and where is it headed? 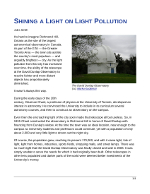 Shining a Light on Light Pollution

It’s hard to imagine Richmond Hill, Ontario as the site of the largest astronomical observatory in Canada. As part of the GTA — the Greater Toronto Area — the town sits astride the country’s most populous — and arguably brightest — city. As the light pollution from that city has increased over time, the ability of the telescope at the David Dunlap Observatory to resolve fainter and more distant objects has proportionately diminished.